VOTE YES FOR INFRASTRUCTURE FUNDING MAY 24

Have you ever wanted more sidewalks, bike / Light Individual Transportation lanes, and safer streets in Atlanta?

On May 24th, you will have the opportunity to vote on ballot measures that will put over $460M over five years toward vital transportation projects in Atlanta, as part of an overall $750M infrastructure program, including a transportation sales tax: 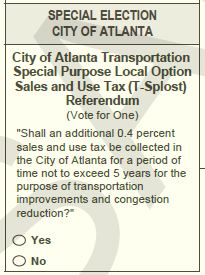 This is followed by a "General Obligation Public Improvement Bond Referendum (For Roads, Sidewalks, Pathways, Trails and Related Transportation, Park and Playground Improvements) as well as a bond for "Public Safety, Parks and Recreational Facilities."

Help ensure these projects are funded and hold elected and appointed officials accountable to build what they said they would build: Vote YES on May 24th.

Visit sos.ga.gov to register, find your polling place, or access a sample ballot.

On Monday, December 6th, 2021, Atlanta City Council voted to approve two pieces of legislation: 1) Authorizing a TSPLOST (Transportation Special Purpose Local Option Sales Tax) and 2) Authorizing an infrastructure bond. Thank you to everyone who asked their City Councilmember to prioritize funding sidewalks and safe streets — several were changes made due to community feedback! Here's our analysis of what's on the lists.

Send your feedback to Atlanta City Council with one click

Read about the legislative process

Go to next steps

The City clearly prioritized sidewalks and safer streets in both the TSPLOST and bond project lists. Here are 4 things to celebrate about the proposed projects:

1. The totals surpass our goal for the TSPLOST of $150M for sidewalks and $150 million for safe streets.

Although the overlap between categories on the list makes it somewhat challenging to break the list down by type of infrastructure (sidewalk, bike lane, trail, street, etc.) when combined with the bond-funded projects the totals surpass our goal.

2. Corridors on the High Injury Network and our street campaigns for the past five years appear on the lists: 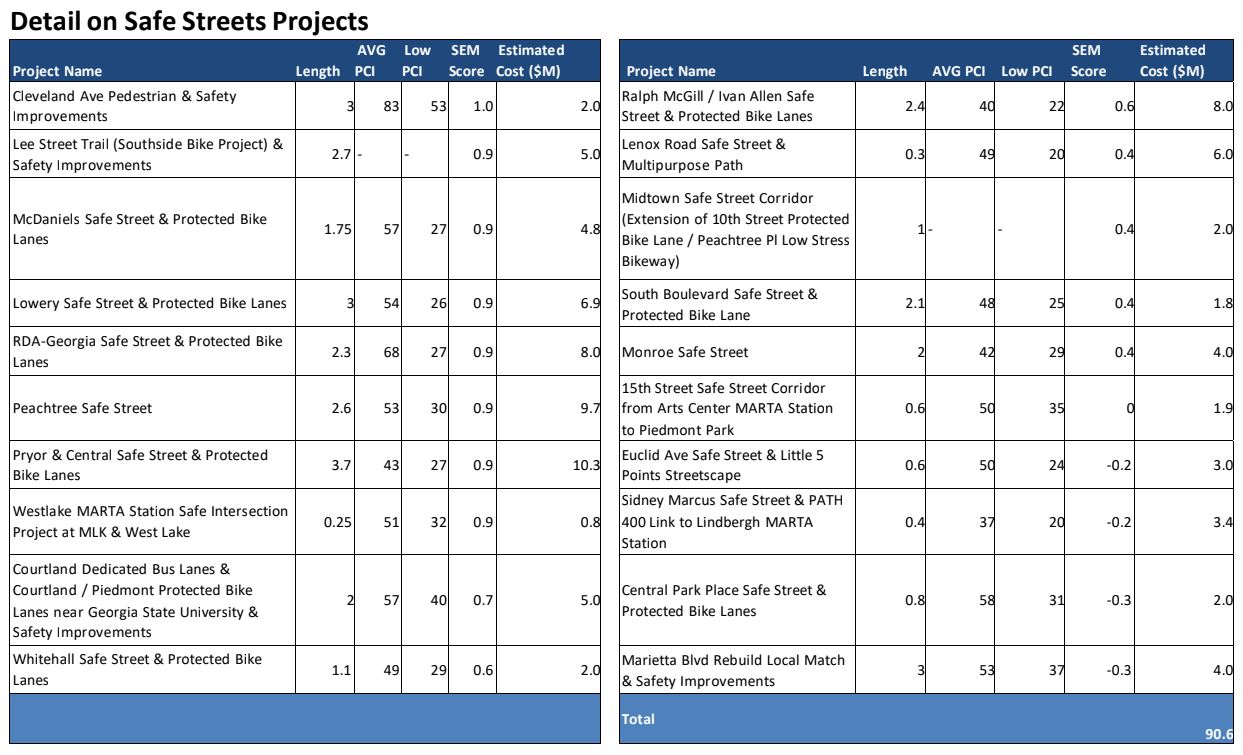 3. Sidewalks get a major boost, using a prioritization method straight from the strategic plan: Safety-Equity-Mobility. 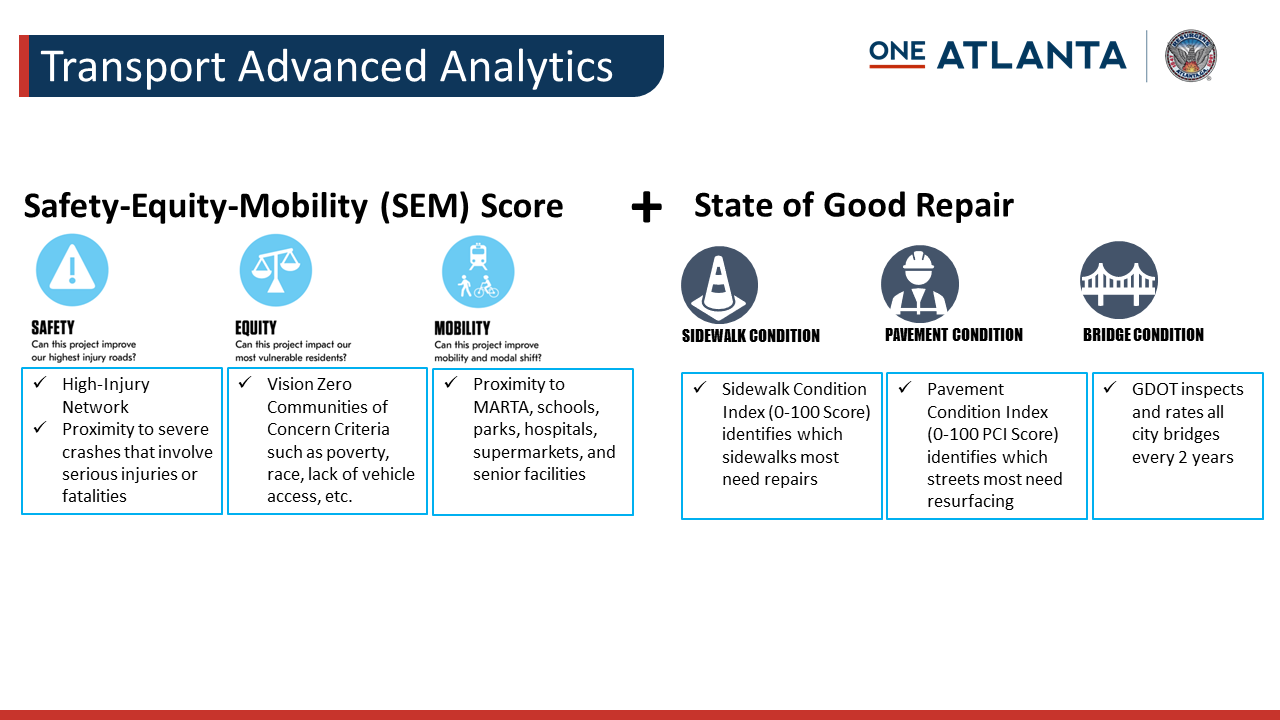 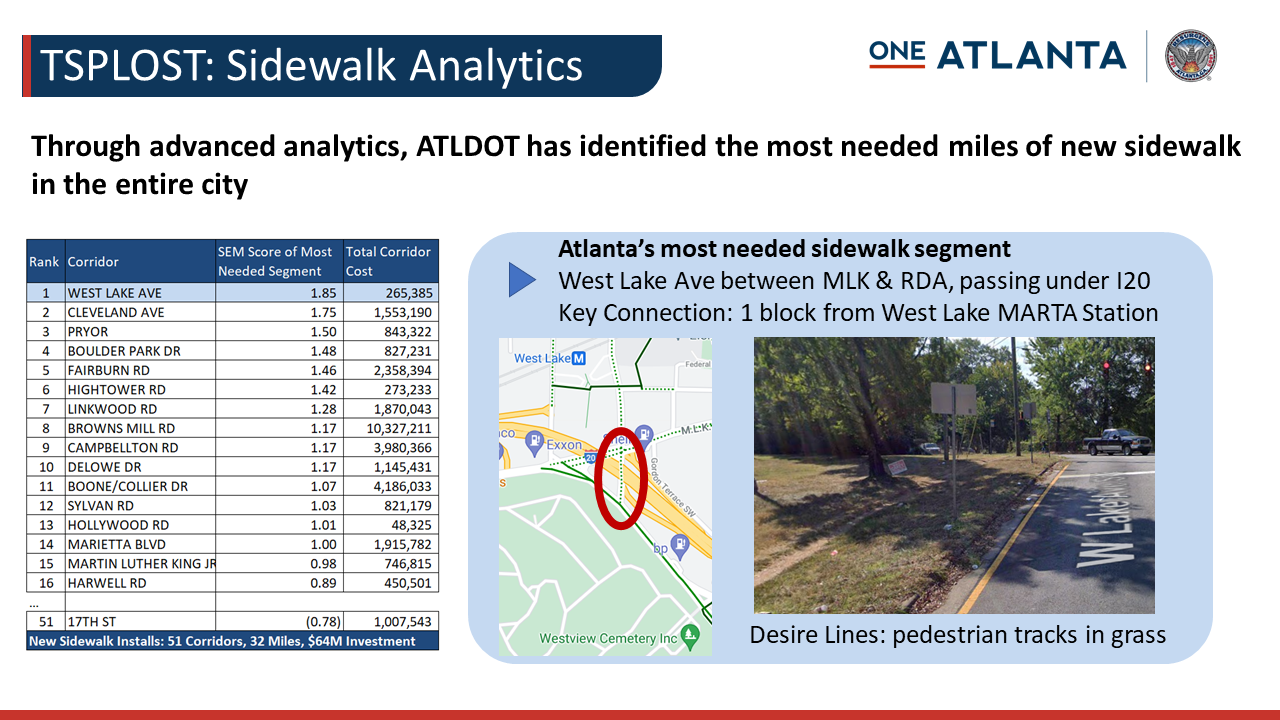 4. Despite the rushed public engagement process, some changes were made based on community feedback:

Our Equity & Mobility policy agenda called for the City of Atlanta to renew the TSPLOST (Transportation Special Purpose Local Option Sales Tax) and to prioritize sidewalks and street safety improvements by allocating 50% of the funding to each.

We wanted the City to select projects based on equity and safe access to transit — starting with High-Injury Network communities — and to consistently and transparently report on its progress.

In November 2021, the City held 8 public meetings about a proposed city infrastructure fund to pay for the tremendous backlog of city infrastructure. The fund was to include a bond (basically, debt incurred by a governmental entity to pay for needed projects and repairs) and TSPLOST (a sales tax on goods and services that is dedicated to transportation). 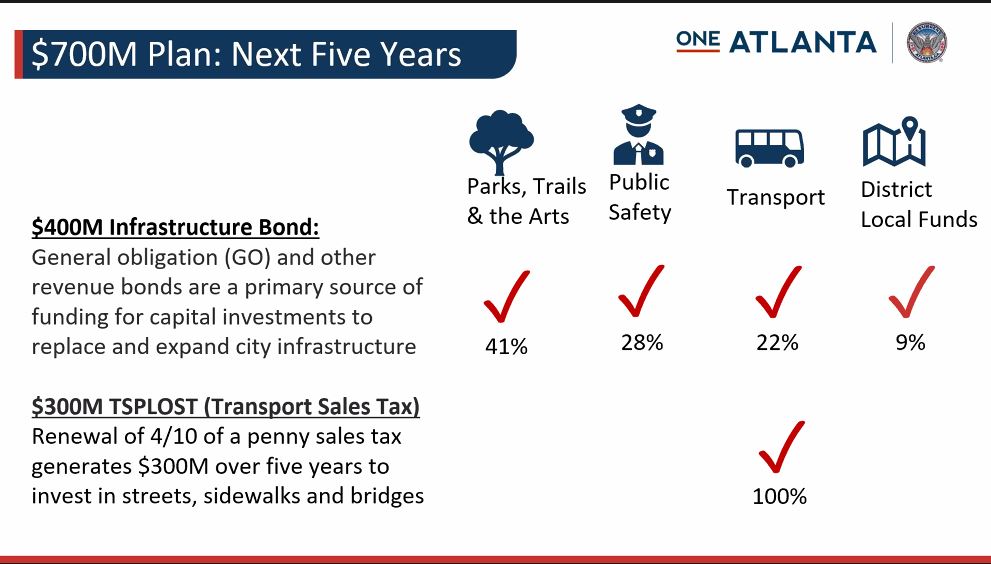 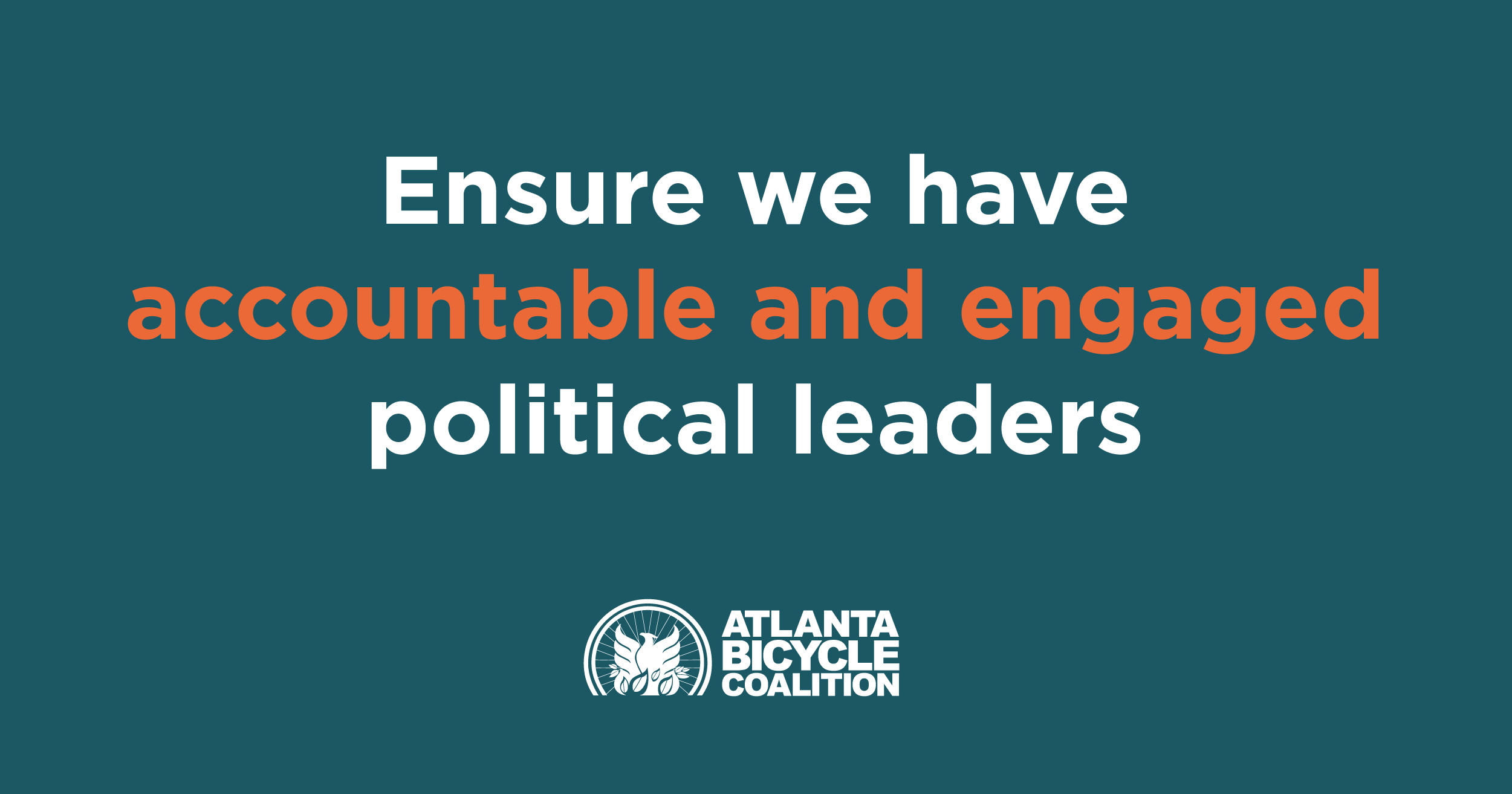 2. TSPLOST: 21-R-3927 A RESOLUTION BY COUNCILMEMBER CARLA SMITH CALLING FOR THE IMPOSITION, BY THE FULTON COUNTY COMMISSION, OF A TRANSPORTATION SPECIAL PURPOSE LOCAL OPTION SALES AND USE TAX (“TSPLOST”), TO FUND TRANSPORTATION PURPOSES AND A REFERENDUM ELECTION THEREON; TO APPROVE THE SUBMISSION OF A LIST OF TRANSPORTATION PROJECTS AND PURPOSES TO FULTON COUNTY; TO SPECIFY THE AGGREGATE MAXIMUM COSTS OF SUCH PURPOSES TO BE FUNDED BY THE TSPLOST; TO SPECIFY THE MAXIMUM PERIOD OF TIME THE TSPLOST WILL BE IMPOSED; AND FOR OTHER PURPOSES.