The City of Atlanta Fiscal Year 2023 final budget reallocated $1 Million from the proposed Atlanta Department of Transportation budget to pay for firefighter raises. The adopted ATLDOT budget is $57.5 Million--a 7.6% increase over 2022.

In May Mayor Andre Dickens released his first annual budget. The general fund, which covers most basic city services, weighs in at $734M, the largest ever for the City of Atlanta.

We wanted to know how the Atlanta Department of Transportation, entering its third year and facing a change in leadership due to the resignation of Commissioner Josh Rowan, fared. See the details for yourself on pages 451-459.

The draft budget included a 9.5% increase for the Atlanta Department of Transportation and adds 21 staff roles to reach 367 full-time positions. The final budget for ATLDOT was $57.5M, an increase of 7.6%. 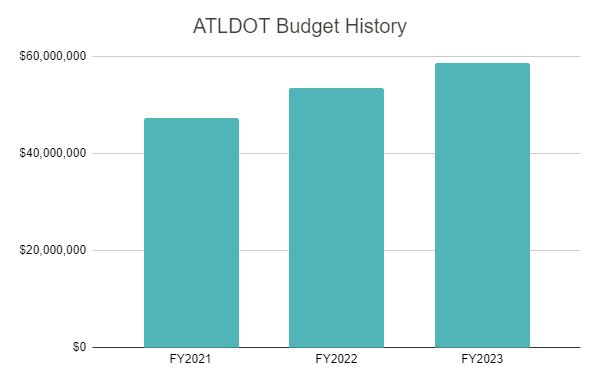 At $57.5M the DOT is still about 8% of the City’s overall general fund budget of $734M, coming in 4th behind the police department at 32%, fire, and non-departmental funds.

(Infrastructure projects show up in the different funds, such as TSPLOST and Capital Projects, as well as the budgets for MARTA, and county, state, and federal governments. Read more from Atlanta Civic Circle: What's in Atlanta's new budget and how do you fit in?

3 of ATLDOT's GOALS for the year ahead