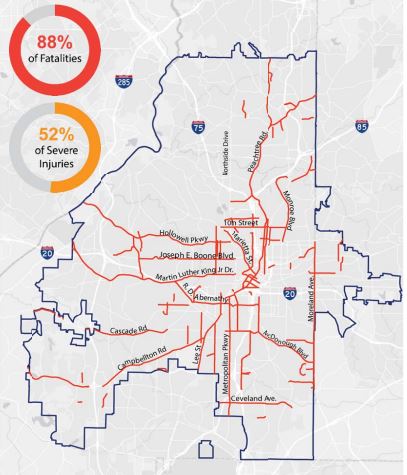 Known as the High-Injury Network, these streets are not evenly distributed across the city — in fact, roughly two­-thirds of the network is located west of Northside Drive or south of I-­20.

On the whole, neighborhoods with more miles of the High­-Injury Network had lower median incomes, a larger share of Black residents, higher rates of walking, biking, and taking transit to work, and lower rates of vehicle ownership.

Because we believe in social and racial justice as outlined by the Untokening’s Principles of Mobility Justice, we are committed to working consistently and intentionally to prioritize racial equity in our policies and practices. The first goal in our strategic plan is to make streets measurably safer for people biking, walking, and using scooters or wheelchairs. Seeking to abolish the concentration of deadly streets in the most overburdened communities serves both purposes: racial equity and preventing deadly crashes.

Read more about the High-Injury Network

DEADLY CRASHES ON THE RISE

Deadly crashes on the rise

Deadly crashes involving all kinds of vehicles and modes of travel rose 56% between 2020 and 2021 in Atlanta.

For people walking, the increase was even greater: 115%

Resource: How to find crash data

To make streets measurably safer, we must hold our city and state accountable to provide:

We advocate for policies and projects that prioritize racial equity and engineering solutions over armed enforcement, and safety improvements, sidewalks, and safe crossings for people. Ultimately, we want to completely eliminate traffic deaths through the safe system approach known as Vision Zero. We focus on the High-Injury Network corridors – the streets most dangerous for vulnerable users – in order to save the most lives. It will take time, dedicated attention on the part of city and state departments of transportation, and resources to eliminate all deadly crashes, but by taking a safe systems approach, these agencies can reduce the number and severity of crashes.

Safety improvements don't come without sustained advocacy! Select a project below to learn more and get involved.