Every two weeks, Atlanta City Council’s Transportation Committee meets to consider legislation and get updates from Atlanta transportation departments and agencies. We review the agendas in advance, decide what legislation is most relevant to our strategic goals, determine if public support or opposition is needed, then attend the meetings virtually or in person. This is our monthly summary of the meetings and the issues we are watching. 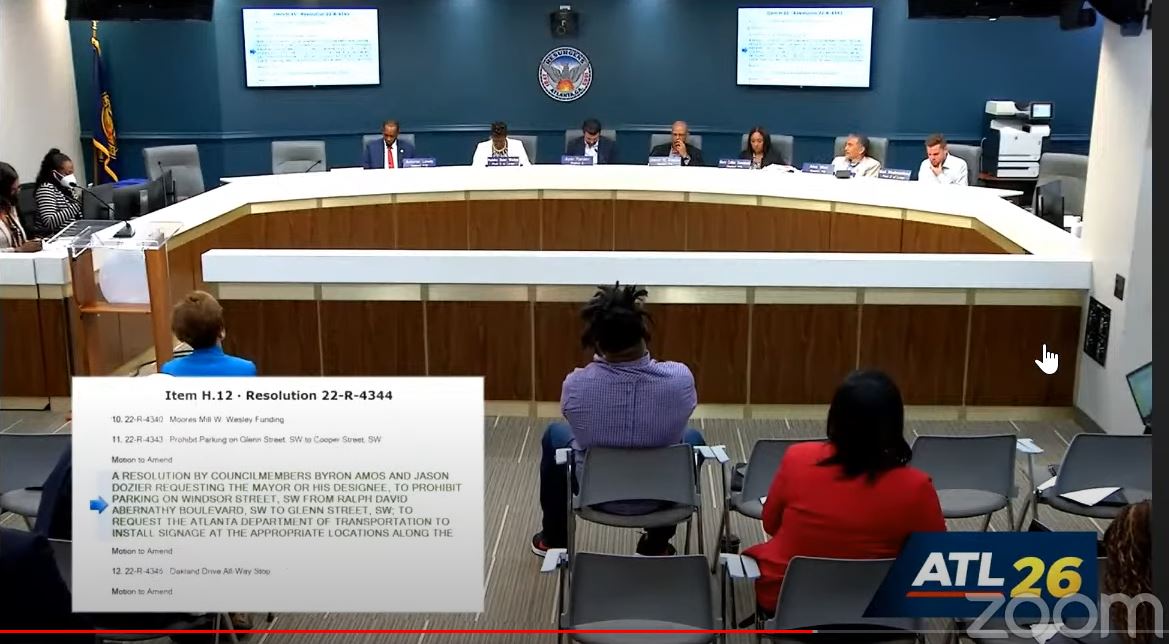 Project delays and contract extensions: District 6 Councilmember Alex Wan asked about the delays and extensions appearing regularly on council meeting agendas. For example, this month there were ordinances to extend the contract term by up to 9 months for the Glenwood Ave / Moreland Ave intersection improvement project and the Peachtree Rd project by up to 18 months. Like so many Atlantans, we want more effective project delivery, so we’ve been asking questions to better understand the root causes of so many project delays.

We’ve all heard about delays caused by the procurement challenges, but there is another obstacle we've learned about – ATL DOT does not have enough Project Managers to keep the hundreds of currently funded projects moving. ATLDOT recently started working with a loaned executive to review their staffing structure. We hope one of their recommendations will be to hire more Project Managers, and that those positions will be funded in next year’s budget.

TSPLOST project list legal obligations District 8 Councilmember Mary Norwood introduced a resolution to change the design of a 2016 TSPLOST-funded intersection improvement project. The legislation did not advance after Councilmembers including Transportation Chair and District 2 Councilmember Amir Farokhi raised questions about the potential impact on the City’s legal obligation to build voter-approved projects, citing the Baker St two-way conversion project as an example. The Law Department provided clarity: if a project is on the voter-approved list the City is obligated to build it, but how that project is designed is up to the Department of Transportation. This resolution prompted a lot of discussion and is worth a listen.

Repaving downtown streets with 2015 bond funds An ATLDOT deputy commissioner introduced a walk-in paper to repave the downtown grid around City Hall (specific streets to be repaved were not mentioned during the meeting or in the legislation, nor were any changes to the design of these streets discussed). The project would cost over $6 Million and would be funded out of the 2015 Renew Atlanta bond.

Councilmembers had a lot of questions about this, including why the legislation was a walk-in paper and therefore not in the meeting agenda packet, and most importantly – where the funds would come from. Other councilmembers asked for more details, noting they went through a painful rebaselining process of the bond and TSPLOST in 2019 that resulted in half of the original projects being cut or severely scaled back. During an update in February 2022, then-Transportation Commissioner Josh Rowan reported that progress on the list of projects was 61% complete. Just 22% of Complete Streets projects were finished at that time. It appears that one reason projects languish is the lack of funds for repaving. 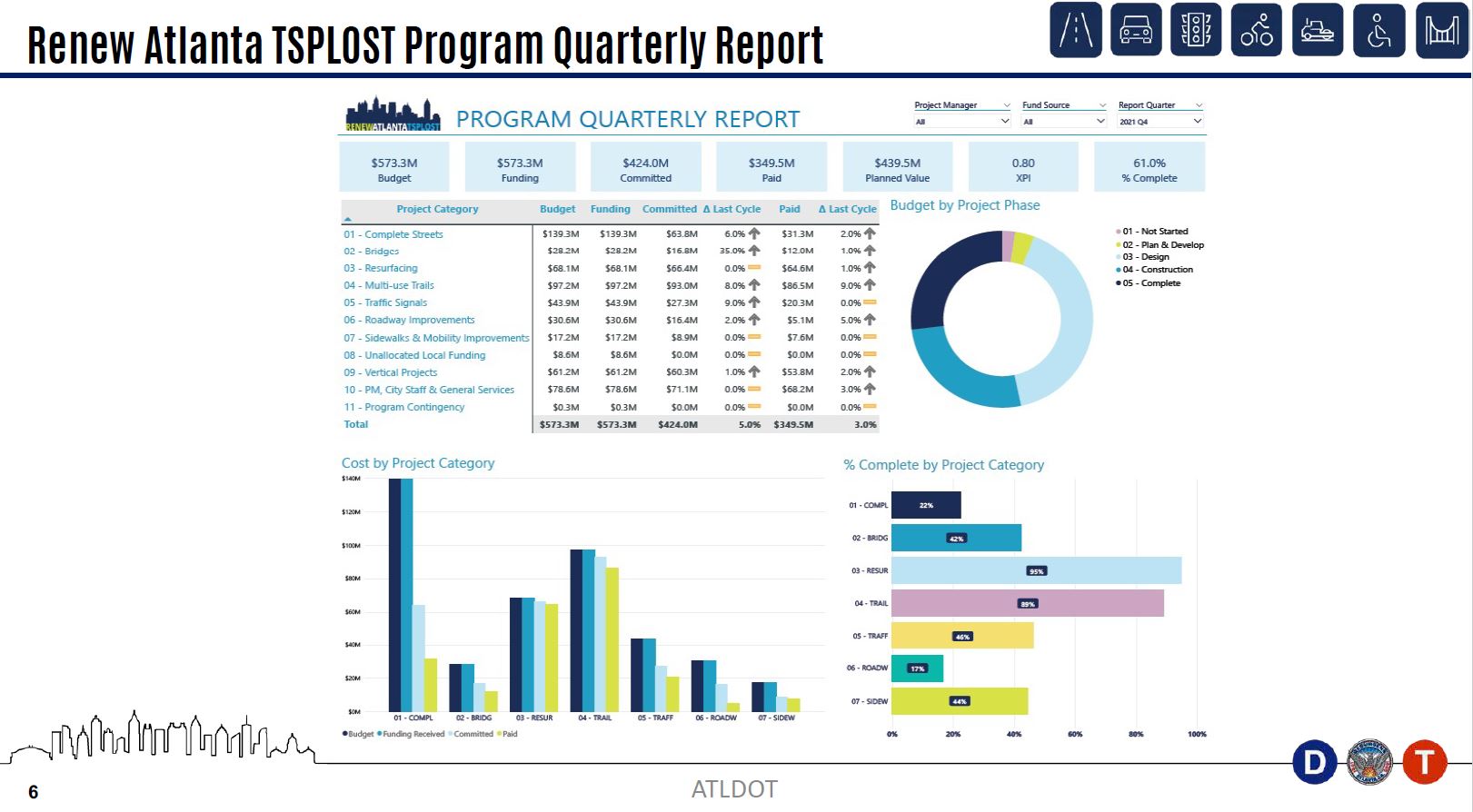 Ultimately the committee voted to move the paper forward without a recommendation. It will be debated in the full City Council meeting Monday, October 3rd.

We later learned that the resolution, 22-R-4417, includes the following streets:

To pay to repave these streets, the 2015 transportation and infrastructure project bonds would have to be “reprioritized” again, then those funds would be “replenished” with Moving Atlanta Forward Bond funds in November 2022. Where would that leave us with the projects on the approved 2022 bond list?

This resolution is likely to be sent back to the Transportation Committee. We’ll be watching the Council meeting Monday, October 3 and following the debate.

[October 3rd update: the legislation was referred back to the Transportation Committee and will be on the agenda Wednesday, October 12th.] 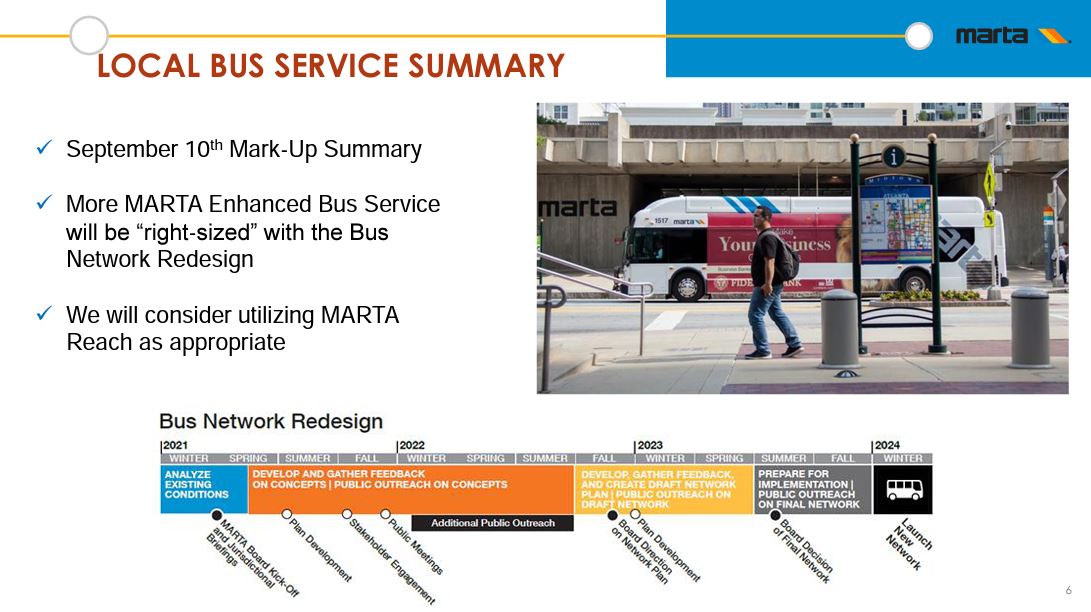 One of the goals of MARTA’s bus network redesign is to create routes that come often enough to be useful. If you rely on a bus that comes once an hour to get to work and you miss it or it’s running late, it can have a major negative impact on your job. That’s why these delays are concerning – riders need better service now. Working in partnership with MARTA Army and others in our transit coalition, we’re meeting with MARTA soon to learn more about the cause of the delay and to express our concerns about waiting until 2024 to implement the redesigned network. 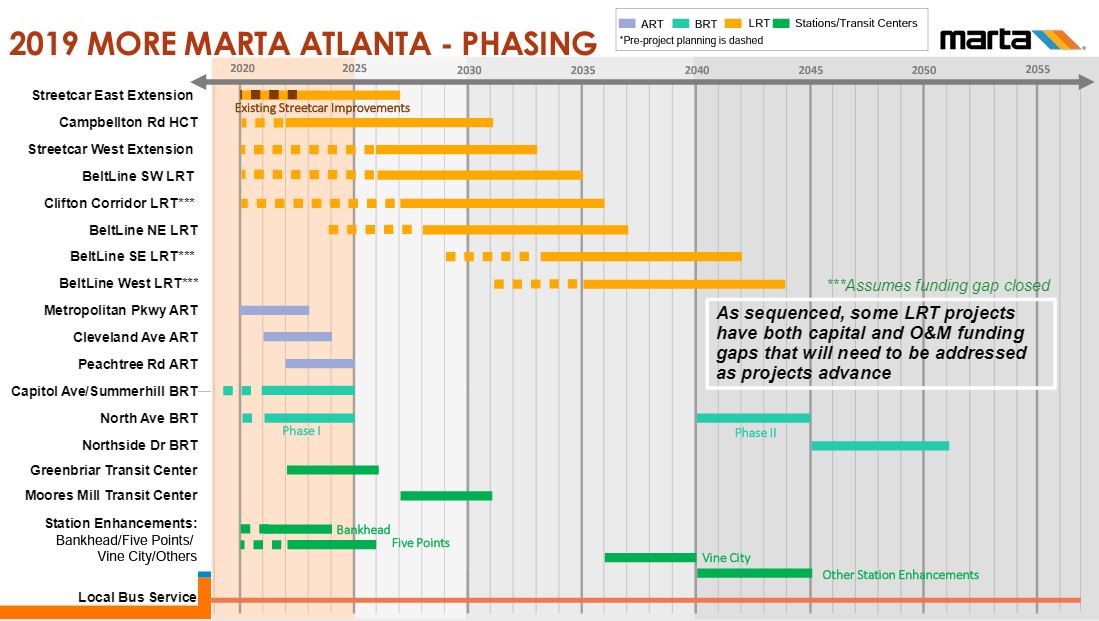 Mr. Greenwood shared a chart with timelines for More MARTA projects (we would like to see ATLDOT share a chart like this for bond/TSPLOST projects on a regular basis). District 4 CouncilmemberJason Dozier asked why Arterial Rapid Transit project delivery dates are so far in the future — Mr. Greenwood cited bandwidth, saying MARTA can't do everything at once. MARTA provided updates on Summerhill BRT, Campbellton Road BRT, Clifton Road, and Streetcar East projects. District 11 Councilmember Marci Collier Overstreet asked when an online accountability tracker would be available – MARTA estimated it would be in the first quarter of next year. 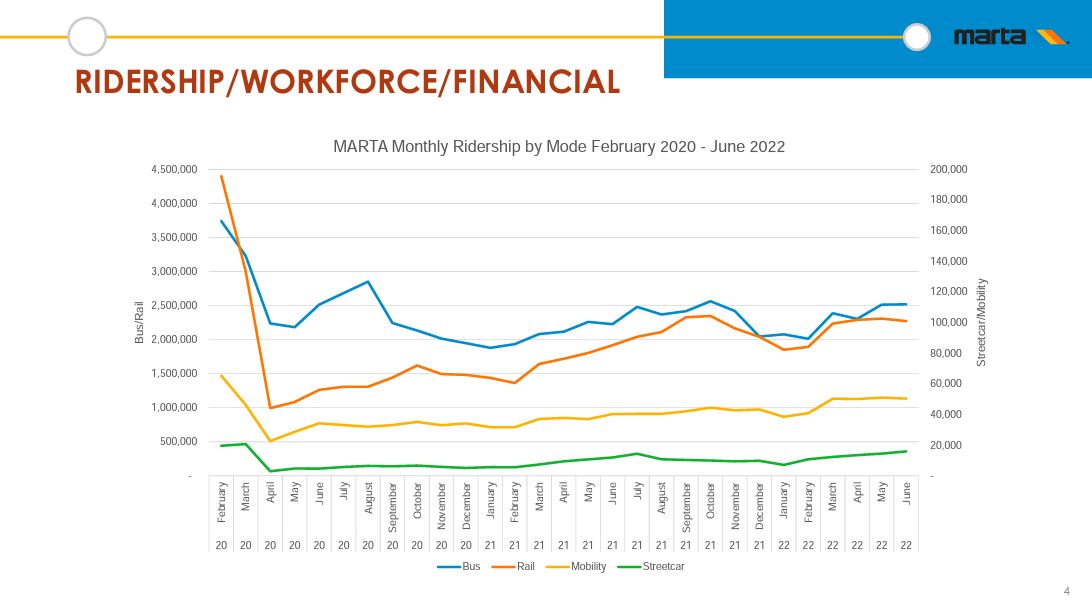 Mr. Greenwood pointed that post-pandemic bus ridership has recovered more than post-pandemic train ridership. This underscores who relies most on transit – people who don’t live near train stations and don’t own cars – and reinforces the importance of redesigning the bus network equitably.

MARTA shared updates on Transit Oriented Development projects in progress for the North Avenue, HE Holmes, Bankhead, and Arts Center Stations. We are waiting for the Oakland City station to be added to this list soon. 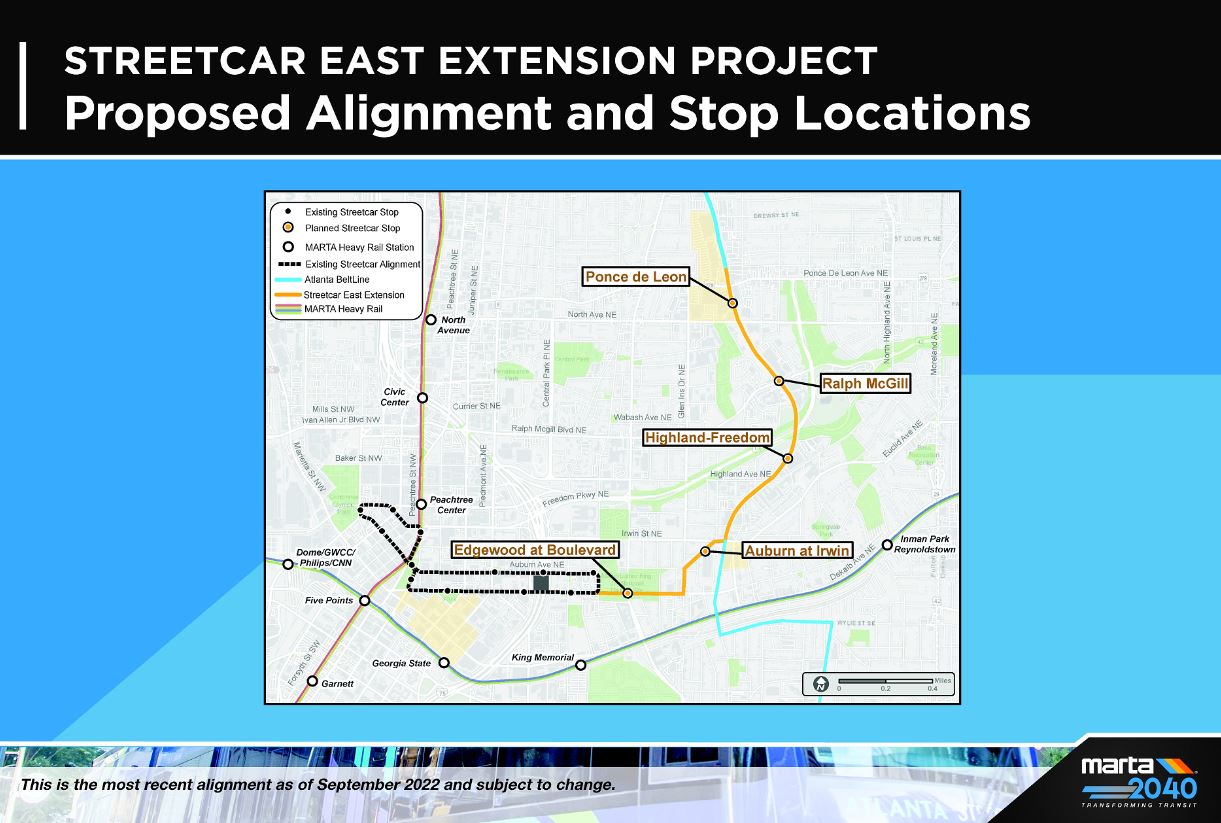 During discussion, Council President Doug Shipman asked about the proposed one-week trial closure of Irwin Street between Sampson and Krog to test how a permanent closure would affect traffic. The idea is to prioritize transit — in this case, the streetcar – for better on-time performance and safety. People could still walk or bike on this section of Irwin St during the closure, and people driving will be re-routed via a detour. You can learn more about the Streetcar East Extension here. To support transit priority, submit a comment in support of the Irwin St test closure – click through to the “public comment” section of the Streetcar East Extension website.

Other topics discussed during the meeting included smart restrooms (good news for riders!), 37 new bus stop amenities (shelters, benches, etc), the end of the MARTA Reach pilot program, electric buses, and the Five Points Station redesign. District 2 Councilmember and Transportation Committee Chair Amir Farokhi asked if MARTA had a surplus or deficit in the last fiscal year – Mr. Greenwood responded that there was an approximately $50 Million surplus. It was not completely clear during the discussion how the surplus was being used, just that it was “in an equitable way.” We will follow up to learn more.