Every two weeks, Atlanta City Council’s Transportation Committee meets to consider legislation and get updates from Atlanta transportation departments and agencies. We review the agendas in advance, decide what legislation is most relevant to our strategic goals, determine if public support or opposition is needed, then attend the meetings virtually or in person. This is our October summary of the meetings and the issues we're watching.

Atlanta Department of Transportation (ATLDOT) Interim Commissioner Marsha Bomar emphasized major staffing holes several times during her report. Compared with what they requested in the last budget, ATLDOT has 90+ unfunded vacancies. This means 90 fewer staff than they needed to plan, build, and maintain infrastructure projects. Bomar concluded "...we need at least a portion to be able to deliver on programs and promises made.” 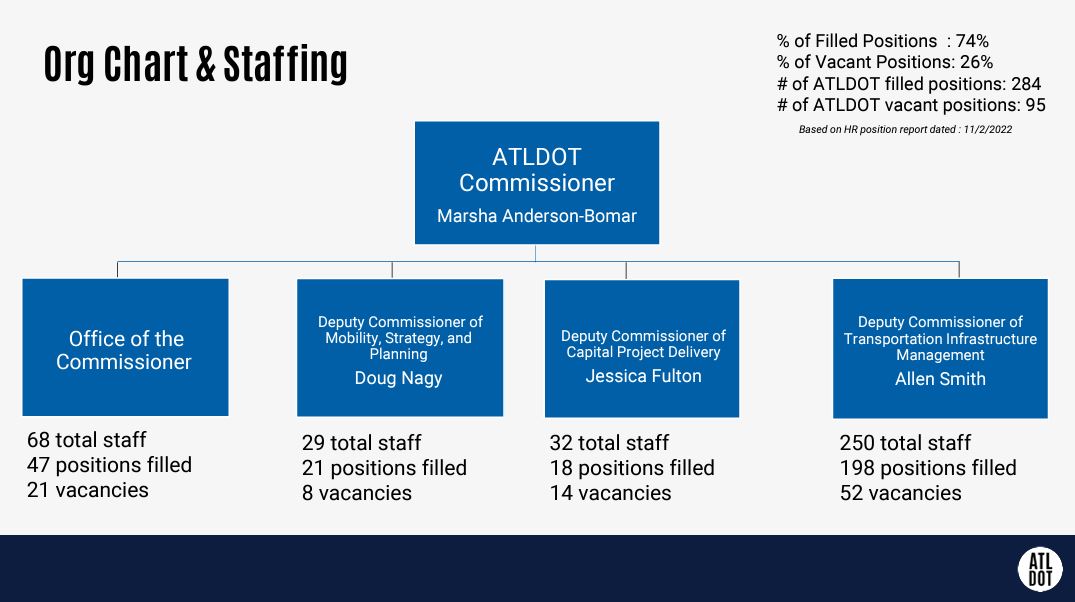 She went on to mention projects still lingering from previous funds: Renew Atlanta 2015 bond and TSPLOST 1.0 approved in 2016.

In some good news, the consultant selected to create the Vision Zero action plan (Toole Design) has started work. We’ve been waiting for this step since the City Council adopted Vision Zero and the 25 mph default speed limit in March 2020, so this is welcome and long overdue.

Commissioner Bomar provided project updates on corridors that Councilmembers have been asking about: DeKalb Ave, Cascade Rd, and Moore's Mill. Nothing earthshaking here, but communicating about project updates is always welcomed.

She mentioned improvements with the Procurement Department timelines, noting they got the new Architecture & Engineering consultants' contracts signed quickly. Five out of 12 teams are fully under contract and they expect the remainder within two weeks. Going back to the project managers gap, she noted ATLDOT can use project managers from these teams to supplement its personnel, but they still need City of Atlanta staff to oversee consultants. This solves part of problem but not all of it.

Progress on streetlights came next: 9,200 of 11,000 promised lights are complete, and the area around City Hall is now well-lit at night. The first set of locations were data driven based on crime, crashes, etc. The next round sounds like it will be more by request.

On the paving front, by the end of this year ATLDOT will have resurfaced 37 miles with LMIG funding. Later in the report, the Commissioner showed a slide that included bike lanes and sidewalks installed. She spoke about the “pothole posse,” saying it was working “fast and furious.” 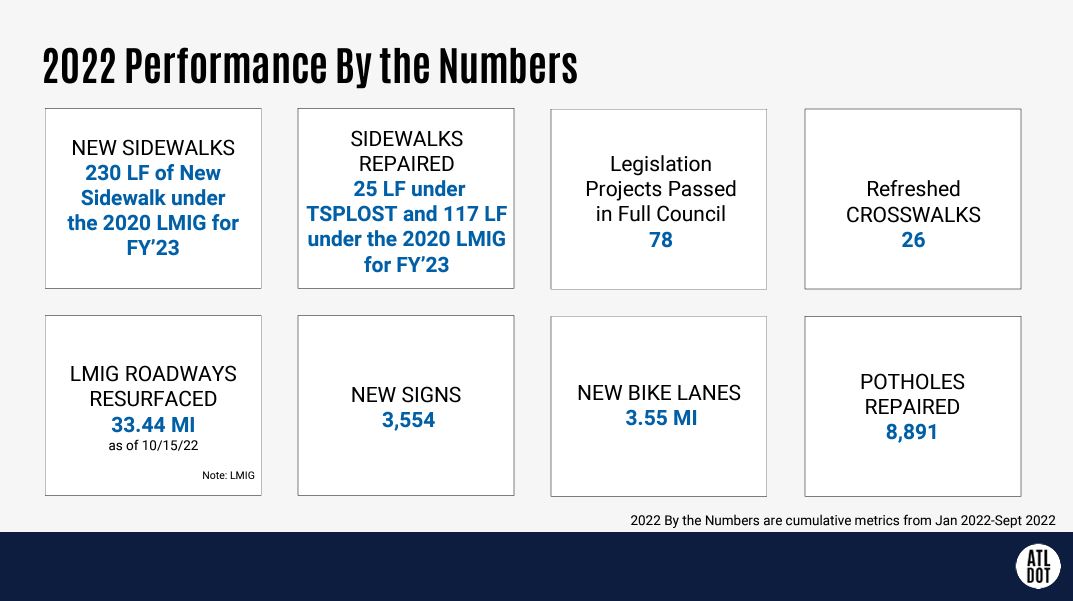 The Downtown resurfacing projects started the Saturday after this meeting (November 19th). Bomar made sure to note that, as requested by Councilmember Jason Dozier (District 4), ATLDOT staff worked “countless hours” to design improvements for people walking and biking into these projects, saying these had been scheduled for later on, but will now be included during the repaving process.

Finally, the presentation highlighted a tremendous backlog of 311 request. We noticed that traffic studies made the list. The response to traffic calming and other requests from community members is often “we need a traffic study,” but we’ve found traffic studies aren’t always accurate predictors. They tend to rely heavily on today’s assumptions about people’s driving habits and overlook their interest in using more affordable and sustainable modes when they are safe and convenient.

Councilmember Keisha Waites (At-Large Post 3) noted she’s received several calls and emails from constituents about issues with speeding on Moreland Ave. She requested a meeting with ATLDOT, and Commissioner Bomar agreed. This is a top concern of ours, with Moreland consistently topping the list of most dangerous Atlanta corridors.

Councilmember Marci Collier Overstreet (District 11) thanked ATLDOT for the Cascade meeting and their commitment to meeting every 6 months as long as the project is underway. She emphasized that communications are the most important, even if they don’t always agree on what is being communicated. She went on on to state her commitment to filling open positions, saying “we have to get it right because it means delivery projects or not.”

Commissioner Bomar then shared that Jessica Fulton, the ATLDOT Deputy Commissioner of Capital Project Delivery, is leaving the City. If you care about building transportation infrastructure this is the key role – please share widely! Job posting on LinkedIn.

Councilmember Antonio Lewis (District 12) and Matt Westmoreland (At-Large Post 2) asked more questions about open and unfunded ATLDOT staff positions and how they can help. Commissioner Bomar promised to send them “a hot one” she needs help funding.

We’re intrigued and thinking ahead to the City’s FY2024 budget and how we can plug in community members and advocates to get the Department the resources we need them to have. It’s hard to hold people accountable when there aren’t enough people.

Here’s our blog post about the plan – we read it so you don’t have to.

Commissioner Bomar talked about improvements to the funding program structure and project delivery process based on lessons learned from Renew Atlanta and TSPLOST 1.0. She urged Councilmembers to talk to ATLDOT staff ASAP about spending their district funds, in order to get the projects completed by the timeline required by the bond of 3-5 years. She also asked for their appointments to the community oversight committee.

If you read our blog post, you know ATLDOT created “batches” as a way to prioritize – groups of projects that will be “activated,” or scheduled at the same time. Bomar elaborated on this process and some changes to those initial batches, saying the bond timeline requirements and requests from Councilmember and stakeholders caused them to make adjustments to the batches. 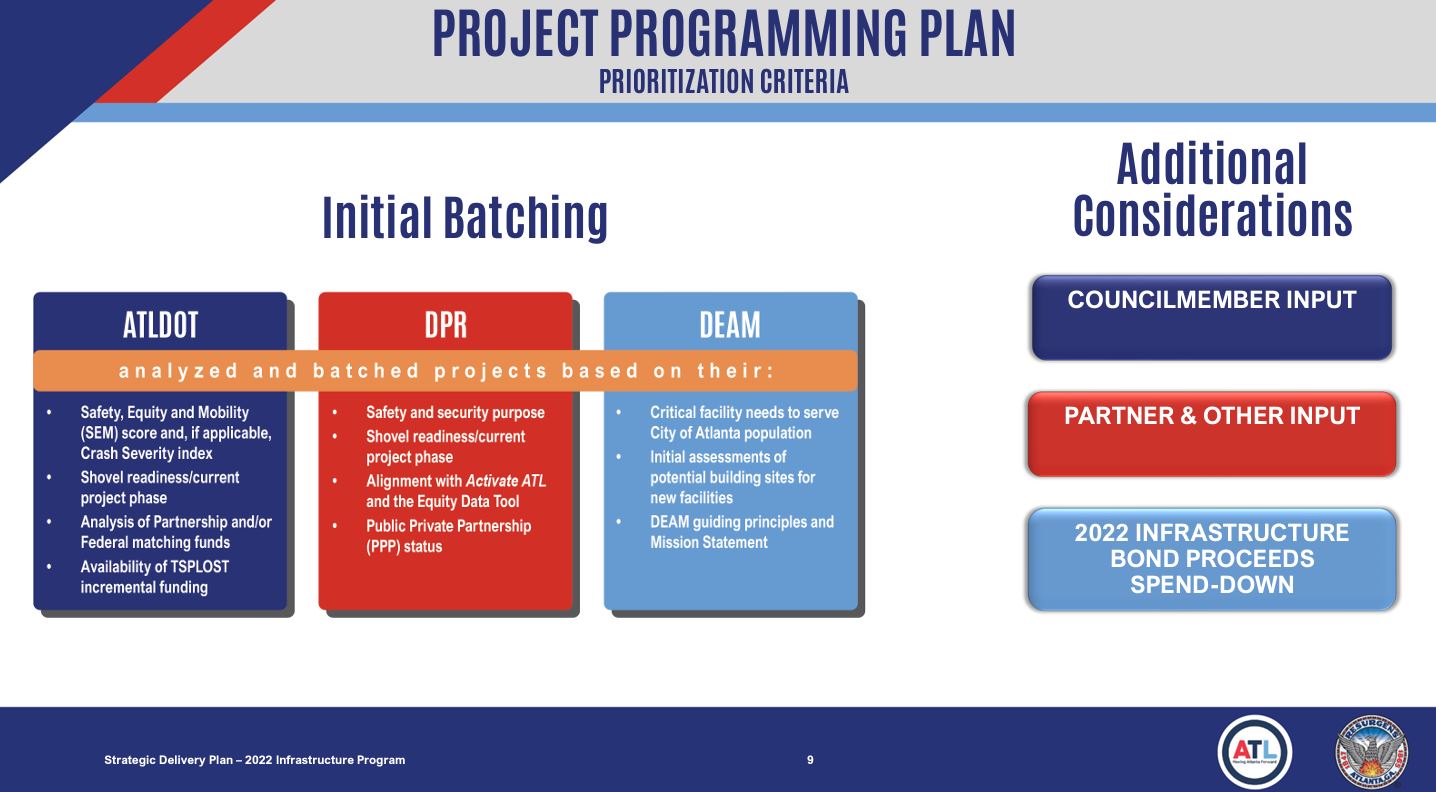 We were concerned to see long-awaited Complete Streets projects on two of our highest priority corridors, DeKalb and Cascade Avenues, on the list of delayed projects based on unspecified requests. We are following up to learn more and will keep you updated. 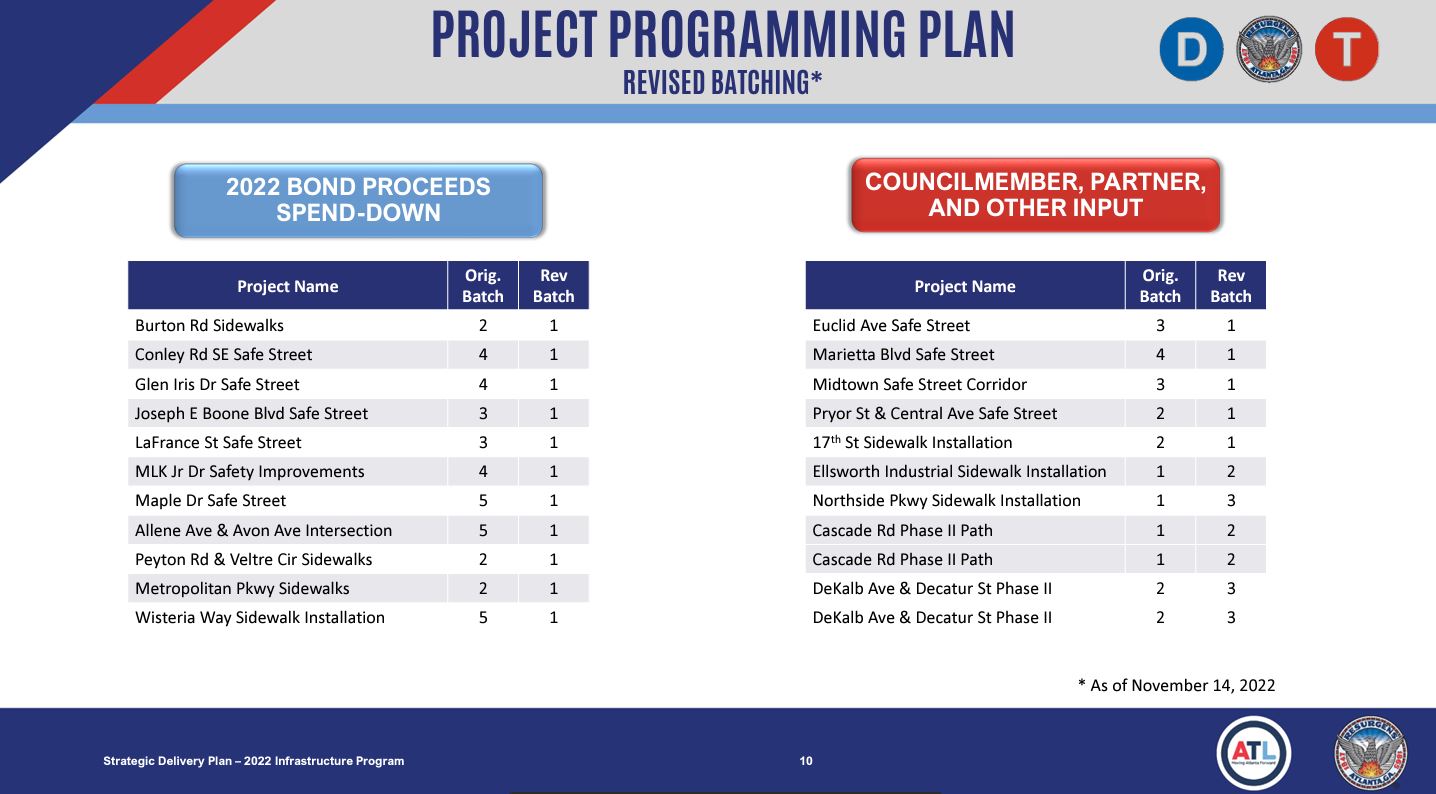 Following the presentation, Councilmembers Alex Wan (District 6) and Marci Collier Overstreet (District 11) reiterated the importance of transparency and building projects approved back in 2015 and 2016. Councilmember Wan asked for more detail on the levels of staffing needed so Council could support those requests. Councilmember Overstreet talked about making sure the City didn’t further erode public trust in its ability to deliver on promises.

MARTA ridership is still around 60% of pre-covid figures. On the brighter side, MARTA has met 100% of its recruitment goals for operators. However, it continues to face a high absenteeism rate for operators. This is concerning – riders on some routes continue to report buses that never arrive, leaving them stranded. We’ll follow up to learn how MARTA plans to deal with this challenge. 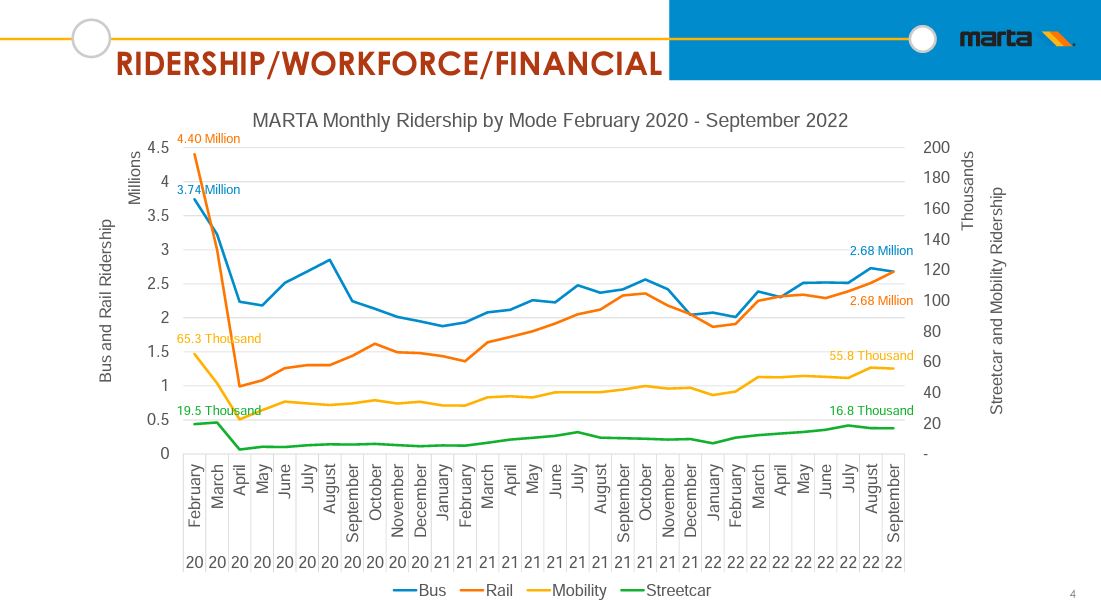 About 150 people attended the Clifton corridor meeting, during which they helped narrow down the number of alternatives from 10 to 3 and indicated a preference for the route to end at the Avondale station (instead of the Decatur station). We can expect a key decision on this corridor, known as the Locally Preferred Alternative (LPA), in late January or early February.

Opportunities to provide feedback include the Five Points station transformation. 119 people attended pop up meetings in October, and you can still weigh in: fivepointstransformation.com

Showing they are listening to feedback about community engagement and communications practices for its projects, MARTA is providing social media training for consulting teams to create more consistent external communications.

Some More MARTA projects are starting to show progress. The Summerhill corridor project is advancing: MARTA has started Right of Way (ROW) acquisition, the procurement package is published, and the bid date is 1/23/23.

The Bankhead station and Cleveland/Metropolitan ART projects are still in design phase. Campbellton is now eligible to complete for fed funding in future. There were updates on multiple Transit Oriented Development projects including at King Memorial, Edgewood/Candler, North Ave, Bankhead, and Arts Center. Oakland City will be next, followed by HE Holmes. Compared with a few years ago, it feels like TOD is finally taking off at MARTA.

Everyone is invited to experience MARTA's new rail cars in an "immersive virtual reality setting" leading up to their 2025 debut: Friday, December 16h at 10 am. RSVP: [email protected] 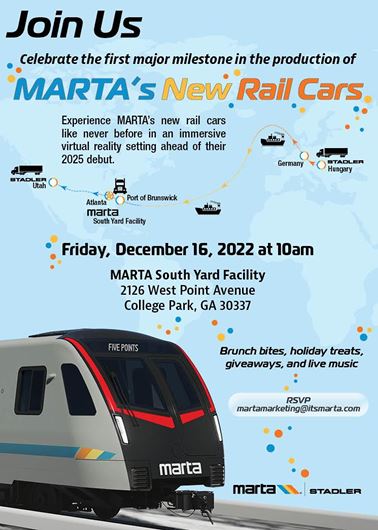 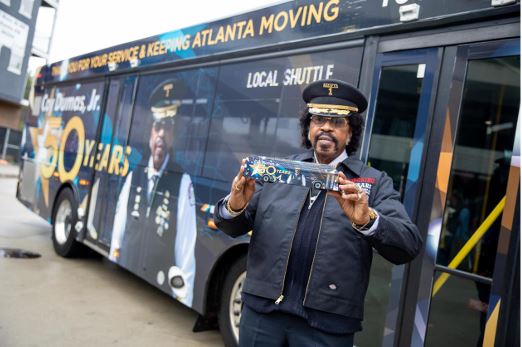 Following the presentation, Councilmembers asked some well-informed, tough questions about spending levels within the More MARTA program. It was good to hear their focus on ensuring projects get built, not just planned. 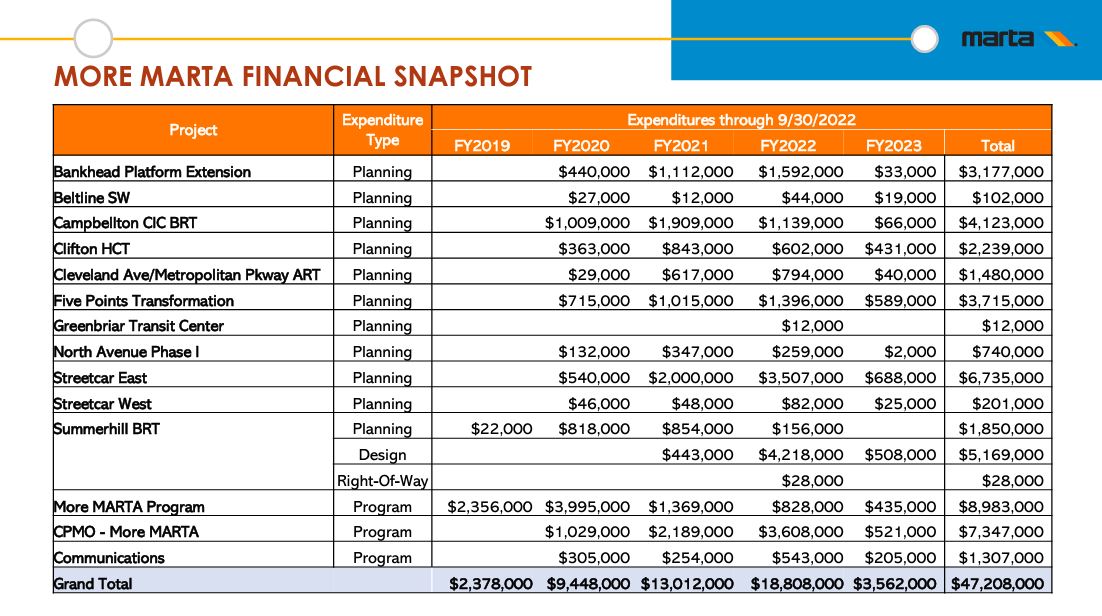 Due to the resignation of the two City of Atlanta appointees to the MARTA Board, Mayor Andre Dickens gets two new appointments. We’re big fans of the two he selected for a four year term:

A resolution to extend the hours for “shared dockless mobility devices” (e-scooters and bikes available for rental) from 9 PM to midnight passed by a 9 to 3 vote. Read our thoughts on this change.

To spur more personal e-bikes and support more sustainable mobility options in Atlanta, Councilmember Matt Westmoreland was joined by Jason Dozier, Liliana Bakthiari, Dustin Hillis, Jason Winston, Amir Farokhi, and Michael Julian Bond introducing a study group To Review National Best Practices And Provide Recommendations For The Creation Of An E-Bicycle Rebate Program For The City Of Atlanta. We’re pretty excited about this legislation and look forward to joining the working group – more on our blog.

Finally, if you want to keep up with key pieces of legislation, you can follow Atlanta City Council on Medium.